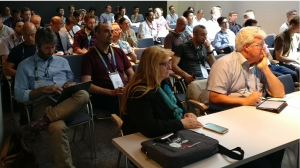 We held an OpenMP BoF “OpenMP 5.0 is Nearly Here — Find out All About It!” at the ISC2018 event in Frankfurt on Tuesday June 26th. There were over 80 attendees, filling the available space in the room.

The BoF seemed well received, and achieved its objectives of educating people about new OpenMP features and providing feedback to the language committee and Architecture Review Board.

We look forward to seeing you again at our SC18 BoF in Dallas (assuming the SC reviewers accept our proposal).

Unfortunately, Bronis R. de Supinski (chair of the Language Committee) had to return to the USA before the BoF, so Michael Klemm (OpenMP CEO) presented both his own and Bronis’ material.

Michael then went on to present Bronis’ material on OpenMP 5.0, pointing out the many areas where enhancements have been made, and explaining why they are useful and important. He also mentioned the upcoming public comment period for the OpenMP 5.0 standard.

Some notable questions from the discussion included:

And finally, please read the draft standard. There was significant praise for the efforts that Jakub Jelinek at Red Hat makes to implement the draft and provide feedback leading to improvements before the standard is finalised, but all contributions in this area will be appreciated.