We believe that the BoF achieved the aims set out by the SC organizers of education, community building and audience interaction.

Bronis R. de Supinski (chair of the language committee) presented details of the achievements of the committee which led to the release of the OpenMP 5.0 specification the week before SC18.

Leading technical contributors to the OpenMP standard then outlined key developments in their areas. Topics presented covered features for improved support for heterogeneous computing and accelerators, meta-directives to allow easier choice of optimized code for different contexts, the new, descriptive, loop directive, improved memory allocation control using “allocators”, and improvements to the capabilities of tasking such as reductions, scans, and a new task dependency type.

OpenMP State of the Union

Michael Klemm, OpenMP CEO, gave a short presentation on the vision and schedule for OpenMP 6, and the changes in OpenMP membership structure which make it relatively cheap for academic institutions to join the OpenMP Architecture Review Board (ARB). (As ever, the critical commitment here is not the money, but the time to participate). He also showed the list of OpenMP events planned for next year, with conferences in Edinburgh (UK), and Auckland (NZ). 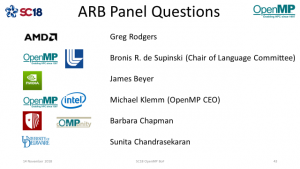 We finished with a series of questions to members of the ARB.  The questions included:

View the slides below or download using the button.

OpenMP State of the Union